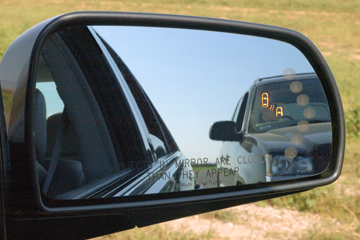 When I first learned to drive, one of the hardest things to comprehend was the concept of blind spots; the idea that a car could be right next to me but that I couldn’t see it. For most of us, when we are teenagers, it is difficult to pay attention to things that are not right in front of us, and as a hyperactive child, I was certainly no exception. “Check your blind spots” was probably the most uttered sentence in the car when I drove with my father for the first year I had my license.

As I got older, I became a better driver. Still not a great one, many would argue, probably correctly, but a better one. I now habitually check my blind spots without really giving it much thought. But there is a problem with doing something habitually – and that is that often, you are not really thinking while you do it. If you asked me at 17 while I was driving what was in my blind spot, I could tell you the make, model, and color of the car that was there. But if you asked me now, I could likely only recount to you that there was or was not a car there. On the road, this is not a terrible thing. There is either a vehicle in your blind spot or there isn’t, and it matters little which color or make the vehicle is, as if you hit it, it will probably kill you. This does not hold true for life’s blind spots.

As we get older, we become less and less concerned with our blind spots, as we become more and more convinced that we habitually check them. By our late twenties, we are mostly set in our beliefs, and in our group of friends, and fairly certain that we’ve figured out how to do it all right, having successfully reached this point in our lives. Our logic is simple: we can afford to live in nice apartments, put food on our plates, and hold our own in social situations, so we must be doing fine. And we may very well be doing fine.

But “fine,” at least for me, and probably for you if you’ve made it this far, is not a good standard to set for personal growth. So the question I asked myself, or rather the one that was asked of me by a close friend yesterday (Thank you Ariel Deshe), was: What, specifically, is in your blind spot?

As it turned out, my blind-spot is an obsession with productivity and learning, that on the one hand can be extremely positive and growth-inspiring, but on the other, can be very off-putting to friends and strangers alike. When someone is speaking about something that is interesting, or that I want to learn about, I am 100% there, and can often be found taking notes. But if someone interrupts a task to tell me something that my snap judgment tells me will not fall into one of those two categories, I semi-politely give them only half of my attention in the hopes that they will stop speaking.

Having realized that, I felt at once both guilty and angry at myself for allowing such selfish behavior to define my interactions. But the realization of that shortcoming was also liberating, and guilt and anger turned quickly to resolve at the prospect of a challenge that could be overcome, and excitement that it was and is within my ability to change that which I do not like about myself.

Going forward, I intend to make note every evening of an opportunity I capitalized on to be a true listener, and an opportunity that I missed, so that I will be better tomorrow than I was yesterday.

What’s in your blind spot?