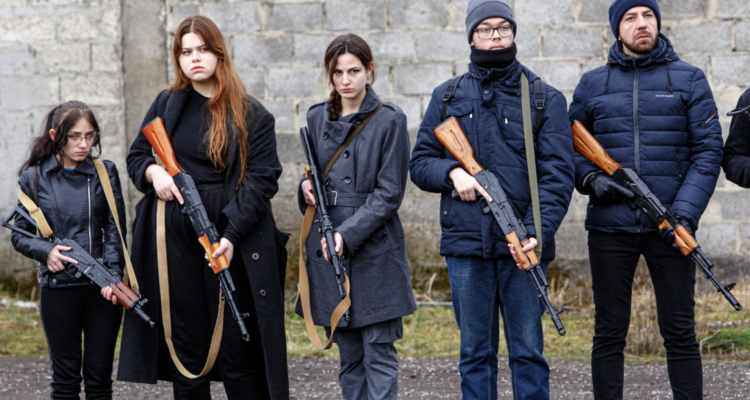 I, like many of you I am sure, have been unable to turn off the TV over the last few days. It is surreal to see a sovereign nation under siege, and to see it in real time, filmed by everyday people going through it. I read this morning that a Ukrainian soldier, Vitaliy Skakun Volodymyrovych, took up a position at a bridge near Crimea when Russian tanks were advancing. When he realized he wouldn’t be able to get out in time before the explosion that would be needed to prevent the Russian advance, he took the decision to stay down and ensure the bridge was destroyed, even though it meant giving his own life.

Combat is a strange thing. You see, hear, and feel at a higher level. Everything is elevated, as though you are on a drug, and the entire world is boiled down to the things in front of you, and the men next to you. War is tragic, and in many ways senseless given that there are alternatives. While it has always been so, the ability to watch it in real time as it is filmed on smart phones accentuates its absurdity. And yet as long as wars rage, real people will be put in real situations in which they will need to decide whether or not their life is worth the defense of their country, of freedom, and of their way of life. And their actions may be heroic, even if the act of war is not.

Sergeant Vitaliy’s sacrifice forces us to ask ourselves: “What would we be willing to fight and die for?” In an age of Tik-tok, Netflix, and Virtual Reality, it is easy to fall into the trap of believing that the only battles we will see in our lifetimes will be on screens. History suggests otherwise. In the words of Plato, “only the dead have seen the end of war.” And even as we think about what would be worth the ultimate sacrifice, as the soldiers and citizens of Ukraine are being forced to ask themselves today, the question of what we are willing to live for is equally important, and more closely related to the former than I once realized.

Major John Hottell III, a West Point Graduate and Rhodes Scholar killed in the Vietnam war wrote his own obituary. In it, he wrote, “I deny that I died FOR anything – not my Country, not my Army, not my fellow man, none of these things. I LIVED for these things, and the manner in which I chose to do it involved the very real chance that I would die in the execution of my duties…If there is nothing worth dying for – in this sense – there is nothing worth living for…”

This week has me asking questions of myself about what is really important, and how I can strive to be the person worthy of the sacrifices of the men and women who laid down their lives that we might live in this free, messy, at times conflicted, and yet, still United States of America.

What gives meaning to your life? What would you die for, and how are you living in a way that honors that answer?