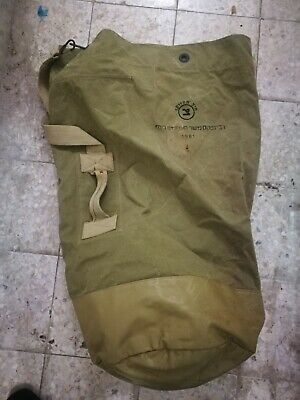 My Army bag, by outward appearances, is a large green duffel bag. To me, it is a time capsule. Roughly a year ago, I hastily threw a collection of clothing, toiletries, uniforms, and assorted other accessories into the bag, zipped it shut, and handed it off to Eric, who graciously stored it for me in his apartment. Today, as I combed through the bag in preparation for my upcoming week of training in the Negev, I came across a map protected by a plastic sheet. It was the map of the navigational route I had memorized last year, when I was charged with navigating the company towards an imaginary suspect’s house. I had been in the midst of a difficult time in my relationship, which has since ended, and thoughts of how and if we could make it through consumed me throughout my week of reserve training. Planning for that navigation had taken my full attention, and thus distracted me for a few hours from my uneasiness. I gently placed the map back in the bag, but the memories it stirred up were not as easy to put away.

Next, I pulled out a black undershirt, part of a donation given to us when we were called back to the reserves during the 2014 Gaza operation. Memories of the sadness of falling rockets and fallen soldiers wash over me. Then, I had been in the strange place between soldier and civilian – not yet a year out of the Army, I was a month from starting my first job after 7 months of travel. We had been called up to guard the border while the active duty soldiers entered Gaza. Tensions ran high, and infiltrations into Israel via terror tunnels were frequent. Our makeshift sleeping quarters were in an underground bomb shelter, which is where the kindergarten classes took place on the kibbutz. The tragedy of school children forced to take classes underground has stuck with me. As I threw the shirt back into the bag, the sound of laughter caught my attention, and I looked out over Ben Yehuda Street from Rudy’s balcony and watched as a group of young men waltzed down the street. It was 10 PM on Saturday. A few years ago, me and the boys would have been at a bar at that hour, drinking pints of beer as though if we drank enough of them, it would prevent the week from starting (the work week starts on Sunday, in Israel).

But the Tel Aviv nights are shorter now. Some of my friends have left Israel, and most of my friends that still live here are married or engaged. The days of boozy Saturday nights are long gone. Some have children. Others have tests. All have someone special in their life, which tends to remind me, even as I am happy for them, and generally happy myself, that I don’t.

I was thinking today about time and space, discussed beautifully in Abraham Heschel‘s book, “The Sabbath.” In the first line of the book, he writes, “technical civilization is man’s conquest of space. It is a triumph frequently achieved by sacrificing an essential ingredient of existence, namely time.” He goes on to discuss our affinity for that which we can see, touch, and build, often at the expense of that which we cannot. Though we have exerted some measure of control over the space around us, time is indomitable. As I walked the streets of Tel Aviv later that evening in an attempt to clear my thoughts, I noted that the place had changed very little, though many years have passed since I lived here. The memories these spaces and places invoke, however, are of a time long gone. The city has changed. People have changed. I have changed.

People ask me if it’s fun to come back for reserves. I view it as an honor and a responsibility. Physically, it is not easy. A decade of knee and back injuries that began in the Army have started to take their toll on my body. Nevertheless, I love seeing my friends from the Army,
and I cherish my time with the ex-lone soldiers in Tel Aviv that became my family when I lived here. But as with my Army bag, there are things I must unpack when I come back that reside in the domain of time, rather than space. And sometimes, I’d rather leave those things zipped up in a green duffel bag.

2 thoughts on “Coming back”