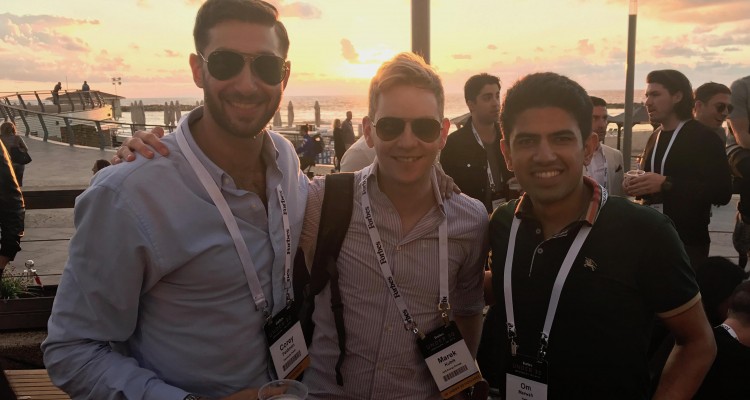 Every choice we make in life; every meeting or event we choose to attend, every time we choose to go and not to stay, has ramifications that we cannot begin to imagine at the time that we make those decisions. A plane that takes off from New York en route to LA, should it adjust it’s trajectory by a single degree, could find itself 43 miles away from it’s originally intended destination.

Many times each day, and thousands of times each year, we make choices that enable or prevent interactions. The decision of where to eat lunch; of whether to approach the attractive stranger; of whether to attend an event or stay home because we are tired or it seems expensive. The impact on our lives of the chance meetings that those events may produce are unknowable to us. They may lead to friendships, business partnerships, and even relationships that can alter the course of our lives. They may lead us to change jobs, live in new cities, or even new countries. Last week I was presented with an opportunity; one which came at a very high financial cost, but which had the potential to bring invaluable reward, both personally and professionally. Ultimately, I decided that the things we regret most are the chances we don’t take.

Imagine a room in which no matter whom you approached, you would find yourself in a conversation with an incredibly accomplished individual who was passionate and excited about the work he/she was doing. Imagine an entire schedule of events attended by those sorts of people. Imagine the Forbes 30 Under 30 Israel Summit. I met a woman who started the first ever non-Photoshop newspaper, and now helps CEOs and world-class authors spread their message. A man who envisions non-manned drones will solve Brazil’s transportation issues, and is raising money to make it happen. A woman who is using photography to empower woman in India and South-East Asia to express themselves and help make a living for their families. A man who decided that rather than live the good life in Australia, he would move back to his home country of Nigeria with nearly nothing to his name and bring wealth to both himself and his country.  (That same man within 5 years found himself on the cover of Forbes Africa). A man who is changing the way company’s think about employee development, and has aided in the development of a company culture that is so inspiring that Harvard Business Review wrote an entire book on the company. A man who envisions that advertising could help virtual reality become accessible to everyone. A married couple that started a sock and underwear delivery service that is .

The energy of the attendees at the Forbes 30 under 30 Israel summit was palpable. It was inspiring, it was invigorating, and it was motivating. The summit brought together 600 people from around the world that represented 35 different nationalities from 25 different industry categories for purposes of collaboration, and exchanging ideas. Many of the participants had overcome barriers of language, prejudice, visa requirements, and in some cases government restrictions to make their dreams come true, and to empower the dreams of others. They were inventors, CEO’s, singers, authors, venture capitalists, and more.

Most networking events are dominated by people who are looking for something. When they ask you “what do you do?” you can almost hear them asking the implied question “…and how can it help me?” With some exceptions, at the conference this week, the implied second question was instead, “and why are you passionate about it?”

To participate in such an incredible event in a country that means so much to me was the experience of a lifetime.  Israel, known as the “Startup nation,” was a fitting place for a conference which was dominated by entrepreneurs and self starters. Every 8 hours a startup is launched in Israel, which explains why there is one startup for every 2,000 people, and why there are more Israeli companies on the Nasdaq than all of Europe combined. All in a tiny country the size of New Jersey on the shores of the Mediterranean, surrounded by hostile neighbors.

On my final day in Israel, I had the opportunity to lead a group of a ten people around the Old City of Jerusalem, and to share not only the history of the city but to explain the impact Israel has had on my life. The privilege of taking strangers who had become friends to the Western Wall for the first time, and explaining the pride and emotion I felt when I was sworn in there as a Paratrooper, and took the vow to defend my country, is an experience I will keep with me forever.

The conference reaffirmed for me that the key to getting ahead is getting started. All of us have 24 hours in a day; the same 24 hours that Einstein, Lincoln, Washington, Churchill, and every world leader, artist, creator, inventor, humanitarian, and visionary had each day of their lives. The way we divide those hours over the course of our lives is what will define our legacies after we are gone. I was reminded of the importance of being intentional with my time, and proactive, rather than reactive, that I might measure up to the high bar set for me by an incredibly inspiring group of peers. Thank you ForbesUnder30 – this was an event that I will never forget.