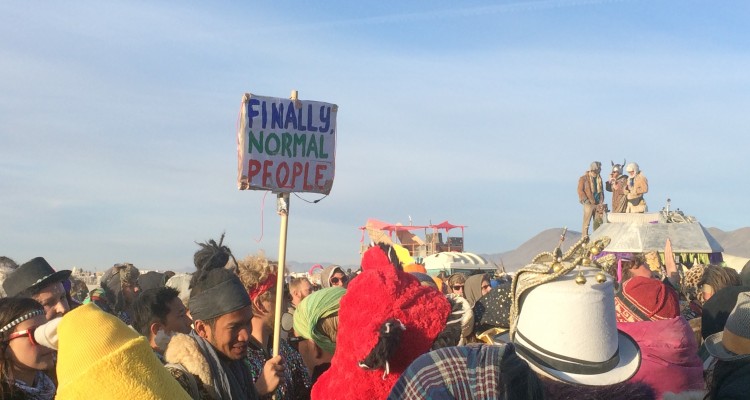 In the midst of the sand storm, I struggled to adjust my facemask and goggles in a futile effort to keep out the dust. The scene was Black Rock City, a temporary dwelling in the heart of the Black Rock Desert that’s completely uninhabited 98% of the year. During the last week in August, sixty thousand artists, craftsmen, CEO’s, partiers, and eccentrics from around the globe descend upon the barren desert in celebration of Burning Man, an annual festival best described as an experiment in radical self-expression.

As I biked towards my campsite, my ears picked up the familiar tune of “New York, New York.” Curious, I changed direction, and biked towards the sound of Sinatra’s timeless voice. As I grew closer, and dusty silhouettes gave way to faces, what I saw left me mesmerized, as would similar scenes throughout the week: there, arm over arm, were twenty dust coated strangers, singing and kicking their feet in unison. They represented various generations, sexualities, nationalities, economic classes, religions, and backgrounds. But in that moment, as they sang together, some completely naked, others in costumes of varying degrees of ridiculousness, none of that mattered. It was the perfect metaphor for Burning Man. In our daily lives, each of us wears a costume that defines us to our fellow humans. We wear the suit of a banker. The apron of a chef. The hard-hat of a construction worker. At Burning Man people remove their costumes, and replace them with leopard-skin bodysuits, light-up Tutus, and in some cases, nothing at all. When that happens, economic distinctions and preconceived notions melt away, leaving only personality and creativity to distinguish people from one another in a beautiful display of our common humanity.

Before I left for burning man, one of my close friends asked me why I was voluntarily taking vacation days to, “spend a week in the desert smoking weed with a bunch of hippies.” Outwardly I scorned him for his close-mindedness, but secretly, I wondered if my paid time off might be better spent at a resort. As I discovered, it would not have been.

I arrived in Las Vegas last Monday overly concerned with efficiency to the point of ignoring the beauty that surrounded me, and far too attached to my cell phone. Over the prior four months, while I had done much soul searching, self-discovery, and personal growth, I was still feeling the ripple effects of the end of a two-and-a-half year relationship. My week in the Nevada desert calmed those ripples, put my cell phone in perspective, and changed me in profound ways.

At burning man, for a fleeting moment in time, I watched a city spring up from the ground and draw people from around the world to celebrate the things that connected them to one another rather than lament the things that separated them. Internationally renowned architects spent months and sometimes years building incredible statues and structures that stood for less than two weeks before they were taken down and in some cases, burned down before a cheering crowd. University professors with PHD’s gave free lectures on topics ranging from emotional intelligence to Einstein’s theory of relativity. Strangers greeted each other with hugs rather than handshakes. Enthusiastic, semi-nude burners chased after one another not to sell their goods and services, but to give things away, all with no expectation of receiving anything in return. I volunteered for several days at the Interaction Cafe, which served no food or drinks, but rather conversations. For several hours a day, I engaged in deep, meaningful conversations with complete strangers. For a full week I didn’t touch money, and only twice did I see someone on a cell phone; I walked into makeshift bars to find strangers looking up and smiling at me, rather than looking down at their phones.

On Monday morning at 6:45 AM, I found myself in an area known as the deep playa on the outermost limits of Burning Man. As a famous DJ spun deep house beats on a multi-million dollar speaker system attached to a bus, the first rays of dawn peaked over the desert horizon. The hundreds of people dancing around me let out a giant unified cheer, as together they danced in the last day of Burning Man. At that moment my wandering eyes fell upon a man wearing a full banana suit wired with flashing lights, and holding up a sign that read: “Finally! Normal people.”

In my sleep deprived, semi-altered state, I walked out onto the desert plain towards the rising sun, and took a moment to reflect on what I had experienced over the past seven days. Daytime highs in the nineties with little shade and nights where lows reached the thirties, in combination with omnipresent noise, meant very little sleep. No cell phones meant that while biking around in the darkness among tens of thousands of people after a dozen drinks, a single distraction at times left me separated from my friends, forcing me to spend an evening wandering alone, interacting with complete strangers. When you put people under extreme physical duress, they can’t help but show their true colors, for better and for worse. Six of us living in a dust-caked RV keeping various sleep schedules and a four hour daily max on the Air Conditioner meant occasional arguments, and it meant that our inherent flaws were exposed to each other and to ourselves.

I left Nevada last Monday afternoon committed to working on my flaws, and to spending less time looking down at my phone and more time looking up at the world. I left committed to listening with intention to the stories of my fellow human beings from all walks of life. I left ready at last to put the past behind me. Most importantly, I left with a better understanding of whom I want to spend my time with – which it turns out is precisely the sort of people that attend Burning Man, or as one man in a banana bodysuit put it so simply, just other “normal people.”