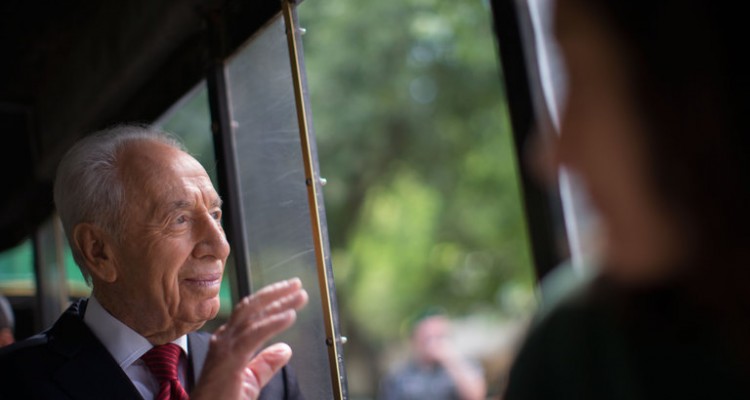 Today Israel mourns the loss of Shimon Peres, and with him the Israel of old. Shimon Peres was the last of the generation of leaders that helped to transform Israel from a dream into a thriving homeland for the Jewish people. Over the course of 50 years, Shimon Peres held nearly every major position in Israel’s cabinet. As the defense Minister in 1976, Peres oversaw the most daring and successful counterterrorism raid in the history of modern warfare, “the Raid on Entebbe,” in which Israeli commandos flew 2500 miles to rescue 102 hostages being held in Uganda. As Prime Minister, Peres won the Nobel Peace Prize for his role in negotiating the 1993 Oslo Peace Accords between Israel and the Palestinians. As is the case with many great leaders, Shimon Peres never set out to do anything other than what his country asked of him. In his own words, “I didn’t plan to be a politician. The founder of the country, David Ben Gurion, called me from the kibbutz to serve in the underground. We were short of manpower, short of arms. I was 24 years old. I was supposed to serve my country for one or two years. I am 89 years old this year, and I keep going.”

Shimon Peres was not just a man; he was a symbol of the Zionism, work ethos, and dedication that we associate with the birth of the state of Israel.  In his story is the story of Israel – the unwilling warrior who sought to live in peace, and was called time and again to take up arms to defend his values and that which he loved.   While I do not agree with all of Peres’ decisions as a leader, he will always be a hero and a role model to me as he was to countless others. Today I reflect on three of the many lessons he taught and lived, which will stay with me forever.

“It’s better to be controversial for the right reasons, than to be popular for the wrong reasons.”

Too often we choose the road of least resistance; it is far easier to go with the flow than to seek your own path. Shimon Peres never did. He ran 5 times for Prime Minister without being elected. He made choices that were consistently unpopular, and even went behind the back of a Prime Minister in an attempt to make peace because he believed so strongly in it. His decisions were rarely popular, but he was not deterred.  In a day when elected officials will say anything to earn their spot in office, Peres did not compromise himself to win – with Peres you always knew what you were getting.

“You don’t make peace with friends. You make it with very unsavory enemies.”

Nobody is irrational – nobody wakes up in the morning and says “today I am going to treat my employee/coworker/friend unfairly.” This is even more true of those we vehemently disagree with, and at times when we feel we have ration on our side, it is worth asking what rational looks like to the person sitting across the table. Peres recognized that his perspective was not the only perspective, and only in so doing was he able to do what no Israeli Prime Minister before had succeeded in doing – making peace, however fleeting, with the Palestinian leadership.

“From my earliest youth, I have known that while one is obliged to plan with care the stages of one’s journey, one is entitled to dream, and keep dreaming, of its destination.”

From Shimon Peres we learned that we must never stop dreaming. Amos Oz described the elder Peres, his friend, as a “rare kind of adult, who carries inside himself a living child … who behaves as if all his life lies ahead of him.”  Peres lived pragmatically in the present as a leader, but never gave up on the dream of two states for two people. Ernest Hemingway once wrote that “The world breaks everyone, and afterwards some are strong in the broken places.” It would seem that the world, with all of it’s sadness, and all of it’s hatred, could not break the indomitable optimism of Shimon Peres, who never stopped believing that there could one day be peace between Israel and the Palestinians. He himself said it best: “Optimists and pessimists die the exact same death, but they live very different lives.”

May his memory be a blessing.