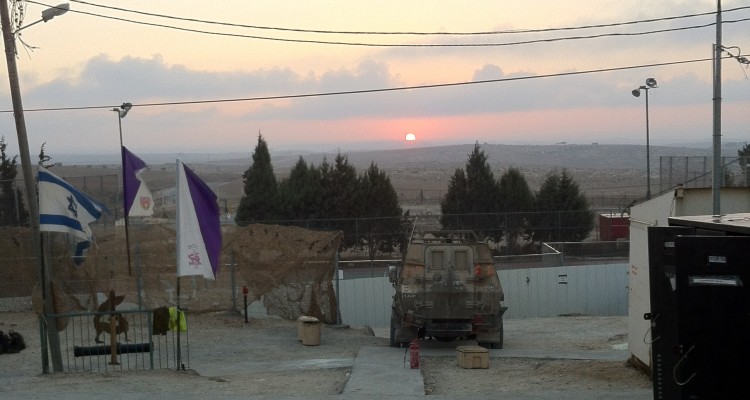 A few days ago was the three-year anniversary of my release from the IDF. While my army service lasted only 3 years, in many ways it felt like I lived the better part of a lifetime within them.

As I think back on my service now, it’s hard to believe that the time I spent in the IDF can be quantified with a standard medium of measurement. There is nothing more believable than the movement of the minute hand on a watch, dutifully ticking away the minutes of our lives, which ultimately add up to hours, days, months and years. In our unpredictable lives, with so many moving parts, time is the constant that gives order to the chaos. Despite what happens to us, without fail each morning the sun will rise and each evening it will set, and the time between those hours will pass in a uniform way. Or so we’re told.  But as anyone who has lived any significant period of time will agree, sometimes it feels as though time speeds up and slows down. A weekend away with someone you love can pass in the blink of an eye. A rough day at the office can feel like a week. 17 seconds when you’re trying to reach and cross the street before the light changes feels more like seven seconds.  Days in the army at times felt like weeks; so demanding was each minute within them. And yet, inexplicably, the weeks at times passed like days.  The smallest pains and pleasures seem to multiply and divide time in ways that physics tells us are impossible. The problem is that the one thing that physics can’t measure is how we feel.

I remember with incredible clarity the night before my release; the tearful goodbyes shared with strangers that had become my brothers. After my last night of guard duty, I watched for the final time as a soldier as the sun crossed the horizon, and a breeze from the west captured the light Nylon of the Israeli flag hanging outside the gates of our base, and stretched it against the colorful backdrop of the early morning sky. Nostalgia is Greek for a remembered pain. In that moment, I felt the reverse: I felt a pain for a future not yet experienced; a future to be lived far away from the people I had grown so close to and without the sense of purpose that had defined the last three years of my life. I remember the surreal feeling of walking through that very gate hours later after cutting up my military ID, and processing the fact that after three years, my life was now my own. There was nobody to report on Sunday morning except myself.

A few months earlier, after a hard week in the Army, I turned to my best friend’s brother-in-law on weekend leave, and told him how excited I was to be getting released. Ben, without missing a beat, responded with the utmost sincerity “This is as simple as your life will ever be.  Even though you can’t see that now, you will miss this a lot when you’re out.” Three years later Ben, I can tell you that you were right.

In the months immediately following my release I relished my newfound freedom. I traveled. I slept late. I skipped workouts. But as the months turned to years, despite the intensity and difficult of life as a combat soldier, I realized that there was much that I missed. The profound simplicity of my purpose – to protect the people of Israel. The physical and mental challenge of training and the satisfaction of completed missions that made Israel safer.  Most of all, I missed the camaraderie of my brothers in arms.

In the army you are surrounded by people that truly know you. When you spend days, weeks, months, and years with the same small group of people for every waking hour of the day, there are no secrets. Everything you are and everything you are not is revealed; the layers of depth are peeled back with time. The stories. The failures and the triumphs. The pride and the insecurities. The “real world,” as I’ve learned, is not as simple. You spend lots of time with people –both friends and coworkers, and you believe that you know them. But it only takes a single incident in which someone betrays your trust or neglects you in an hour of need to realize that people are not always who they appear to be.

And then you realize what you miss- that deep connection to other human beings. You miss knowing exactly who it is on the other side of the room that is snoring so loudly, even though at the time you hated him for keeping you up. You miss knowing beyond a shadow of a doubt that the guy you just got into a screaming match with about who did more guard duty this weekend will still have your back no matter what, even if it costs him his, because you’re not coworkers or even friends – you are brothers.

During my time in the IDF I served alongside Jews, Christians, Druze, and even a Muslim, and immigrants from 6 different countries who had moved to Israel to join the IDF. So perhaps it is not soldiers that must learn to acclimate to the civilian world, but civilians that must learn from soldiers how to connect deeply to other human beings of varying backgrounds and beliefs.

So often we are guarded with each other– as countries build walls to protect their borders, we build walls to protect our feelings. At times we even place façades on the castle walls we have put up over months and years, intentionally misleading those around us as to what truly lies inside of us. We do this out of fear- we are scared to let people see our true nature. Imagine a world where we took down those walls – where we were honest and open with those around us, and learned to trust deeply.

Some of you reading this will call me an idealist. “A glass is half full” sort of guy. I would urge you to consider the following: it is the optimist, not the pessimist, who is the realist. A glass filled halfway is indeed half full of substance, and to suggest that it is half empty is to imply an imagined decline from full to empty that may or may not have been. There is nothing real about assuming the worst in the glass or in people. I choose half full.

And yes: I see the irony in suggesting that training for war provides lessons for living in peace. I see the irony in standing guard over a wall and preaching at others to tear down the walls within them. But a sad reality of the world we live in is that some walls must stand to protect our physical safety from those so unable to connect to people with different perspectives that they would kill those who disagree with them at the first opportunity. But other walls need not stand, and if we learned to take down our emotional walls, perhaps the physical walls could one day follow, as we all realized our common humanity.

In learning how fleeting life can be, as one inevitably does as a soldier, I learned a greater respect and appreciation for all human beings, including those with different perspectives. Because when it comes to people, life is just too short to put up walls.